Learn About the New DAOS Feature in Notes Domino 8.5

Lotus Domino server version 8.5 has introduced a new feature for storing attachments. It is the ability to save a single copy of an attachment object at the file system. Emails use a reference key to access that file. This is called the Notes 85s DAOS Domino Attachment and Object Storage feature. Attachments are extracted from the message files and transferred to a file system on the server. This makes storage and backup much easier as compared to storing emails and attachments at one place. This post clears all the doubts regarding this DAOS feature in Notes Domino 8.5 and discusses all the benefits from it.

What is DAOS Feature in Notes Domino 8.5?

With Lotus Domino 8.5, attachments are no longer saved with the emails. They are extracted from the email database file and replaced with a ‘ticket’. This ticket references the attachments that were originally contained in the emails. The attachments are then stored in Domino server’s file system. The Lotus Notes Domino DAOS feature saves storage space by sharing data that it finds identical between databases. It identifies those attachment files that are common in different email accounts on the same server and extracts them. 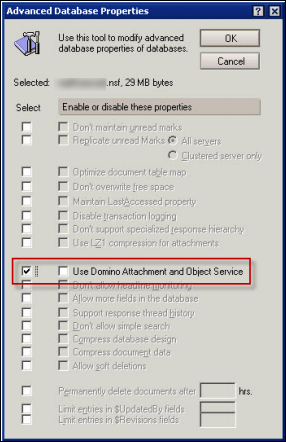 The Domino Attachment and Object Storage feature is a process separate from Lotus Domino server. It takes into account that attachments are shared among colleagues on daily basis using the same server. This attachment file exists in multiple email databases on the server. The DAOS Feature in Notes Domino 8.5 stores this file just once on the Domino server. When the same file is attached to an email, all recipients refer to the storage location on the server. Only the reference counts to the file are increased.

Components of the DAOS Domino Server

Following are the different components comprising a DAOS-enabled server:
DAOSManager: It is the central component that runs and operates the DAOS feature. It is separate from Domino server.
NLO: This is the file extension used for attachments in Lotus Notes Domino DAOS server. The original extension of the attachment is not used for security reasons. Also, each file is encrypted using the Server ID.
DAOS Catalog: It contains a list of all NLO files and references to it. The DAOSManager uses the catalogue to access attachments used in emails.
Tickets:These are rich-text fields of Lotus Notes documents that remain after attachments are extracted. They contain references to the appropriate NLO file on DAOSManager.

Following are some of the many advantages of using the DAOS-enabled server:

Requirements of a DAOS Domino Server

Mentioned below is a list of all the necessary components to use the Lotus Domino attachment and object services:

This is a great new feature added to save storage space and reduce overall time in backing up data. Special precautions need to be taken while migrating DAOS Domino Server. Same server ID must be used in the new system or NLO encryption is useless. Also, backup needs to be changed to archive server storage of attachment files. This post describes all about the Notes 85s DAOS Domino Attachment and Object Storage. If this is not the best option, one can try Outlook to store and send emails. Use the reliable, efficient and perfect solution in NSF to PST . It is the best way to transfer Lotus Notes backup files to Outlook PST.

A writer in technology who specializes in creating explainer content published in blogs, how-to guides, articles, and training manuals. He seeks to provide clear actionable answers to technical queries to make it easier for readers to solve them.

View all of Aldrich Calvin's posts.